Frisket forced us to take a detour today as we drove from Brooklyn to Boston.

She wanted to see the old digs at Grenadier Golden Retrievers and we complied of course.

Frisket entered the house and seemed to do a bit of a double take, then she started walking around picking out which furniture she used to like crawling under. It was clear that she remembered the place.

Pretty soon she'd decided it was her place and took up her normal position in the center of the living room.

Lisa M brought out Boyd first. Boyd and Frisket initially were like "Hey, wait a minute, you're me!" but then broke into a general game of play, chase, play, chase, and jump on people.

Let me just say this: the jumping on people thing is not something that can be blamed on me, it clearly runs in the family. Yes, I readily admit that I taught Frisket to stand on command (it's very helpful with getting her in the car, or putting her leash on when my back is bothering me). However Boyd was quite adept at doing the standing and placing of paws on shoulders thing, and I know I can't be blamed for that.

Boyd is rambunctious but also didn't know what to make of Frisket. They're near carbon-copies of each other, though Boyd is huskier. Just as playful. Much fun was had by all.

Frisket wasn't quite sure what to do with Fraya. Fraya's about 6 months old and very playful. They ran around and around for quite a bit.

Frisket again took stock of the environment and situation, and collapsed in the center of the living room, with a single reverse paw tuck.

Sorry, no pictures, maybe at the next reunion.

No Picture Can Describe It

No picture can describe what Frisket did to herself yesterday, mostly because we didn't take any pictures.

Frisket has been indoors most of the week due to the weather.
Yesterday was a clear day, so Lisa walked Frisket to the local dog run.

There were a number of dogs there, playing around, staying clean.

Frisket apparently aimed straight for the sole mud spot and rolled in it.

She loooooovvvvvvvvvvveeeeedddd rolling in the mud.

And then, just for more added fun, found a very dusty dirt spot and rolled in it some more.

Lisa walked Frisket home, and then to Monster Mutt for a quick bath.

Frisket is spending the day today playing around at doggie day care at Monster Mutt.

Frisket accompanied us to DC for the weekend. On Saturday night we took a long walk from our hotel (the Jefferson) down 16th Street to Constitution and then over to 18th street. Here's some (blurry) pictures of Frisket in Lafayette Park, the building in the background is a white, house-like building. 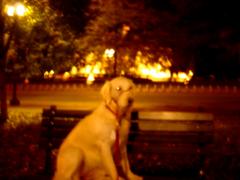 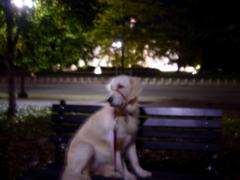