Frisket got a little one night stand in Manhattan overnight. For a variety of reasons, we bagged going to Las Vegas this week and instead spent a night at the W Union Square. Frisket got to romp around the Union Square dog run as well as visit the Union Square Petco, an AT&T wireless store, a Bang & Olufson store and MDC. She was quite the city dog, not disturbed one bit by the ever honking taxis nor the ever-present sirens around Union Square.

Frisket's ears have been clear enough that I decided it was safe to take her to the local dog run. Here's some movie clips to clog your internet connections:


Frisket after a bit at the dog run. She meets a friend and they talk old times. [Alt]
Frisket in action with a friend. There is a dispute over the tennis ball. [Alt]
Frisket just kind of hangs out while a little friend steals her ball [Alt]
Frisket gets back in the spirit of the chase [Alt]
Posted by epc at 11:19 AM

In Chicago Tribune | Dogs running free has price, the Trib writes that DuPage County, Illinois is close to ending free public access to dog runs because of incidents between dogs and, in some cases, between dog owners. Instead they want to charge $40/year for residents and $120/year for non-residents. This is kind of sad as Frisket really enjoys the time she gets to spend at the dog runs when we're in Illinois.

ear mites day 6: the wind shall blow them away

It's a bit windy today.
I'd hope the mites would blow away in the wind but that would simply scatter them throughout the apartment, for Frisket to find again some other day.
Actually, her ear is clearing up.
It took a couple of days but the grunge isn't returning and she isn't scratching away at it as much as she had.
She did try burrowing her head, and the ear, into the floor on returning from our walk late last night but that may be just due to the 1000mph gale that seemed to confront us as we walked around the block.

Frisket is tormented by the squirrel.
See, she thinks that there's just one squirrel in the neighborhood, and somehow it manages to move quickly from tree to tree.
She has each tree where she's spotted squirrel remembered.
As we walk around the neighborhood she'll stop at a tree (or sometimes a stoop) and stare for a bit to see if squirrel is hanging out there.

She gets very upset that she cannot capture squirrel.

Yesterday, we were watching some TV in the den.
Out of the corner of my eye I saw a shadow move across the deck.
Squirrel!
Frisket did not believe me at first but eventually shuffled over to the door to see what the commotion was about.
Squirrel had captured her deck.
Frisket was not amused and proceeded to spend the next ten minutes trying to paw her way through the doublepane glass to the deck.
Squirrel taunted her.
I swear it was taunting her.
It just sat there on its hind legs staring directly back at Frisket, making some sort of movements with its mouth.
Eventually Squirrel ran across the back of the deck to the deck next door.

This squirrel is not the squirrel Frisket saw, but could obviously use a good Frisket chasing.

Frisket has ear mites again.
This time it's the left ear.
I'm a bad dad, I noticed her scratching her ear more than usual the other day but didn't check.
Luckily we still have tresaderm from the last round in April.

Frisket got into a planter on our deck.
Read the details here

Frisket of the dirty couch on hicks street 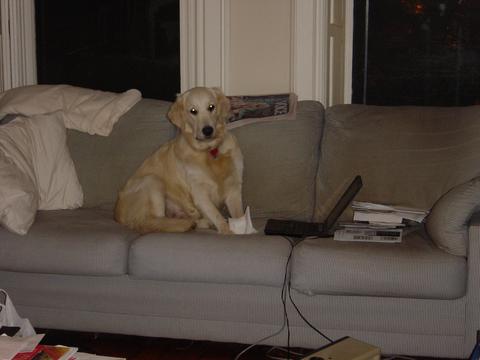 Frisket in the front bedroom, reading /.: 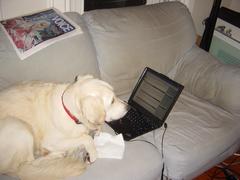